On an overcast and coolish spring day, wife Judy and I headed for Mapleton Falls National Park in the Blackall Ranges of Queensland’s Sunshine Coast for a spot of birdwatching. This pocket handkerchief sized national park( 25.9 hectares) is a mixture of complex notophyll rainforest(vineforest) and tall open forest dominated by Eucalyptus saligna (Sydney Blue Gum) and E. grandis (Flooded Gum). 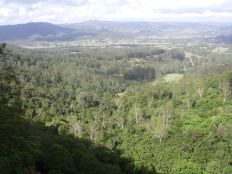 Obi Obi Valley from the falls.

Our timing was perfect. As Judy nosed the Corolla into its parking bay we were witness to an explosion of winged insects pouring from the chambers of a domed earthen mound. These were the winged reproductives of termites.

Termites are a soft-bodied, ancient order of insects, the Isoptera, errorously called “white ants”. But ,in fact, they are little more than modified cockroaches. Termites are social insects as are bees and ants and live together in colonies which contain different castes: workers, soldiers and the reproductives: a king and queen. Winged reproductives are called alates.

There are approximately 2000 species of termites world-wide, 145 of these described in Australia. Colony founding starts with the release of large numbers of the four-winged alates. The releases are typically synchronised by time of year and time of day. In Australia, there are two main flight periods, late spring-early summer and autumn. It is not uncommon for all nests of a particular species in a district to release alates at the same time. So we weren’t surprised to find another nearby mound colony also releasing alates.

The alates are weak fliers and their flight is typically short in duration and time, unless assisted by wind. The wings are shed after alighting. De-alated females then attract the males. Pairs of males and females form tandems for reproduction,  seeking out sites to form a new colony.

Termite mounds at Mapleton Falls were either arboreal or mounds. Our alates were being released from domed earthen mounds.

Termites feed on wood, grass, fungi, dead leaves, bark, humus, herbivore dung and your house.  They harvest this cellulose which is converted to food by a rich gut fauna of Protozoa. The mound building species can reach their food sources by a network of underground galleries and covered runways. One colony can harvest food over an area as extensive as one hectare. Temperatures in the termitarium are much more stable than the outside, temperature variations are damped down to a few degrees. The relative humidity is held close to saturation. An ideal combination for the rearing of brood stock.

And so, on our return to our high-set abode, a Queensland  ” house on stilts,” it was again time to check the solid  wooden stumps and bearers for those tell-tale earthern galleries indicating that the termites had bypassed the protective metal “ant caps”  and were busily munching their way through the tough hardwood bearers of our house.

And what of the birdwatching? Well Judy, my resident birdwatcher, quickly wrangled up a list of 25 birds including Eastern Yellow Robins, Eastern Whipbirds, Green Catbirds, Satin Bowerbird, a Black-faced Monarch and the call of a Pacific Baza. Not bad for two hours of birdwatching. The Blackall Range system has upward of 110 recorded bird species including the Australian peregine falcon which can be seen soaring along the walls of the 120m high Mapleton Falls, the vulnerable glossy black cockatoo and the endangered Coxen’s fig-parrot.